A friend from the US called. 'WOW. I just caught your prime minister on cable – she's a  knockout.'

Not many recently elected governments are called upon to face a crisis like the CORONAVIRUS pandemic. But Sanna and her gang of four took up the task with energy, clarity and a plan. They inform the Finnish people at daily briefings. So far they've done a first-class job. There have been only 20 deaths – the lowest of the four Nordic countries*.

Sanna was raised by two women - her mother and her partner. Her film star looks have caught people's attention, but she's had to dig in and work – nothing was handed to her.  She's given Finland a new profile – young, energetic, international. But she is dead-serious about her current mission.  In my informal poll of Eki and other Finnish friends, they were united in their praise for the way the government has managed the virus-crisis.

Sanna is a poster-model for egalitarian Finland. On the weekends she goes to her husband and two-year-old daughter, shops unguarded at the supermarket and gets a dose of reality and escapes the surreal horror-movie pandemic. Her movie-star looks and excellent English have got a lot of attention for Finland. But in a war, competence and SMARTS trump all.

PS: SANNA MARIN hits the international bigtime - she is featured prominently in the March issue of American and British Vogue. A happy coincidence in the midst of all the Coronavirus angst.

Next week: SWEDEN: open for business – RISKY of RIGHT?

Maggy is right about the polling of friends - I really like how Sanna Marin has handled the crisis and being the prime minister in general. She is smart, educated, calm, listens to experts, humbly admits mistakes when necessary... yea, i really like her, and the rest of current administration.

They have pretty much nailed the delicate balance and timing between the economic and social costs of restrictions* and slowing down the spread of the disease. That's what you get when you actually consistently follow the advice of the experts, instead of falling to the trap of political pressures. While Finland took on some measures later than other countries, the timing actually was pretty early considering the actual epidemic - Finland was late on the onset too.

The measures appear to be working: the number of new cases still grows, but linearly, not exponentially. We get less than 100 new infections per day, and that number has been somewhat steady for two weeks or so now (April 4. 2020), which means we likely have managed to flatten the curve as planned. If the curve was exponential, the new daily cases would be in the thousands already. 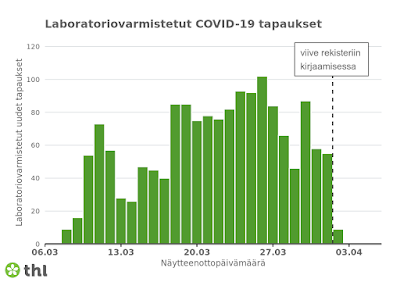 Of course, polling friends is just picking fish from your own little pond. There's considerable opposition in Finland - the country is still somewhat divided between the left-leaning government and the right-wing opposition. The opposition uses the crisis to try to advance their political gain, but with not that much success: they really can't oppose the measures without looking irresponsible so they pretty much must support the government - which is not really in their political interests. The only thing they can really do is to claim more should have been done, earlier, which just makes them look like hindsight-whiners.

The good news is, the True Finns party no longer leads the polls. The one-agenda wannabe-nazis have declined as they have no real solutions - racism and stopping immigration does not stop viruses. Sanna Marin's Social Democratic Party is now again the largest-polling party in Finland.

*  The country was declared to be in a state of emergency, schools, and restaurants closed, no gatherings, social distancing, quarantine-like conditions for the elderly, isolating southern Finland from the rest of the country, etc.