2020 The Year of LIVING DANGEROUSLY


EKI works in his home studio. His work-life hasn't changed that much, But he grew up with scientists – so he's careful. Meetings are on the phone, or by message. He avoids people and wears a mask when he goes out. If there's a reason, he goes to Spacewhale – the studio he, Era and Teemu renovated this year.  He still pulls all-nighters when there's a work crush. So it's pretty much business as usual.  RIIKKA, Eki's wife, has worked through it all. She's on the front line  – taking care of people, who are old, bedridden, and need constant care. For her, the vaccine can't come soon enough. During her free time, she does her art. A beautiful, crochet patchwork. Under glass decorates their dining room table.

The SHARK has worked from home since March. She misses the camaraderie of her friends at the office and the food at the canteen. When I ask her how she is, she says, 'I'm boring'. I  correct her and say 'You mean you're bored'. She says, 'Well both'. We started The Boring Club: you can tell the same story over and over and over and nobody listens. She's president, I'm v.p.

SHARON PETTUS in St. Louis, MO hurt her back and it's hard to walk. Online she found a chic-sleek yellow titanium tricycle without pedals – you walk it. Made in Canada. The Alinker is so in demand that the delivery is six to twelve weeks. She's like a kid who Scrooge left a sack of coal instead of toys. Her husband ROBERT, will be happy when that troika shows up. Sharon will be over-the-moon.

ELIZABETH NELSON,  my sister, is recovering from breast cancer. She's isolating with her husband BOB, in their snug house in  Ft. Collins, CO. They go out to get supplies and take a walk but have no visitors. She's read every book about Trump's terrible four years. And has made a quick recovery. We talk on Saturdays and dish the dirt. We never seem to run out of material.

JONI HERTELL has a house designed by his architect daughter, JULIA HERTELL. It's in Hanko, about two hours from Helsinki. From May till October, he settled in for the long Finnish summer: excursions by boat, dinners with friends, swimming, net-fishing, golf. The town was barely touched by Covid 19. Back in Helsinki, there were more restrictions. He'll spend the holidays with his family in Hanko.

SHARON HELLER and her husband, BILL, have a cabin by a river  in Clark, CO (2,231 meters). Bill hunts and fishes, their freezer is chockablock with delicious raw material. Sharon's meals are like those photos in upscale food magazines. Neighbors, beer in hand, come over for a happy hour. The Hellers are careful and entertain guests outside. They're back in Palisade. Guests sit by a blazing fire pit, drink wine, and chill out.

BETH KOLTAR has an art-deco apartment in Houston, TX. But her husband, STEVEN, longed to be out in the country. They found a place with a pretty stone house, beautiful oak trees, and acres of grass. Steven bought an industrial lawnmower and started mowing. Beth bought a bird feeder and the cardinals flocked in. In the evening, they sit on the back deck and dig nature.

RICHARD BAILY in Oxford, GB is the first person I know to get the Pfizer Covid 19 jab. WOW. They called him one night, the next morning he was at the health center. It was over in a second. Through this whole year, he's been careful but had a matter-of-fact attitude. He said he missed having a beer at the pub with his rowing pals. And dancing every week at the town hall. Now he's waiting for his second jab.

My pals and I know we are lucky to have safe bolt-holes. Now the vaccine is a reality, what comes next?  After the 1918 Spanish flu killed approx. 50 million  people, the twenties celebrated the razzle-dazzle  Jazz Age. Women threw away their corsets, bobbed their hair, wore short, sheer dresses and coupes danced the sexy tango. Wishful thinking?

Next year: 'Life is too serious to be taken seriously.' Oscar Wilde


Note: Our studio moved to new premises. So it's not just renovated, it's brand new. We call it SW5 Studio, as it's the fifth in a row. The English translation of our site is not yet done, but you can look at pretty pictures here: https://sw5studio.fi/

The first Spacewhale "studio" was just a small concrete closet in a basement, that could barely hold our band instruments. Now we have about 200 m² (about 2150 square feet) on the 2nd floor of a pretty nice office building. The band gear is still there, but most of the space is for video: green screen studio and offices/edits.

Unfortunately, all the music stuff has been more or less on a hiatus due to corona - but I'm sure we'll get the band(s) together when things normalize a bit.

But back to the new studio: the new hotness we're building there is real-time virtual set capability - something that used to be an investment of millions of dollars, far beyond the budgets of mere mortals. Thanks to the advancement of consumer technology, almost the same result can now be done with about a thousandth of the budget, using off-the-shelf gear, some software, and plenty of DIY spirit.

Essentially, the position and rotation of the camera used in the studio is tracked in 3D space and brought to the computer, where a virtual camera with matching properties is placed in a 3D graphics world. Think of it as having your actors in the greenscreen studio, teleported into a video game, in real-time. And this result can be streamed live, to youtube, or to a zoom meeting or whatever. It almost works already - we're very near being production-ready. A simpler version of the concept is already in use, using a stationary camera.

Which reminds me, we really should make some promo videos at our new facility - right now the only demo of the concept i have is from my early tests about a year ago, done at my corona-induced isolation studio at home:

TRUMPTY-DUMPTY had a GREAT FALL 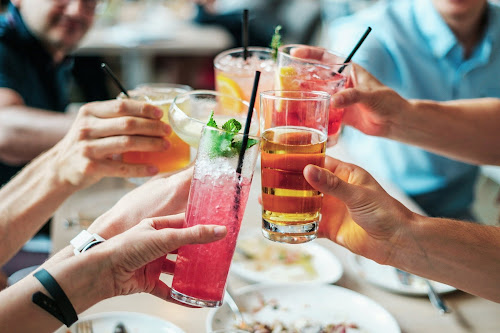 Image by bridgesward from Pixabay

In 2015, Trump blew in like a force 5 tornado. Weird dyed hairdo. Fake orange tan, big suits, long ties, paunch, loudmouth, hair-raising rants at rallies. His tough bully-boy, pseudo-rich guy persona was a hoot. We never dreamed he'd end up the PRESIDENT. Or when he ran for a 2nd term 70+ million, mostly whites would vote for him. But Joe Biden beat him. On Jan.  20, 2021, Biden takes over.  So Mr. President...

HYVÄSTI (President Sauli Niniistö and Prime Minister Sanna Marin want you to know FINLAND is NOT part of Russia), ADJÖ, NAKEMIIN, AU REVOIR, ARRIVEDERCI, DO SVIDANJJA (Putin is crying in his vodka), ADIOS,  SO LONG, AUF VIEDERSEHEN (Angela Merkel is laughing up her sleeve),  CHEERIO, GOODBYE!!!!!! 'We're gonna miss you, sort of, DONALD.' PS: GREENLAND is not for sale!

Next Week:  2020: The YEAR of LIVING DANGEROUSLY


Note: I guess we're allowed a brief moment of glee after four years of the horror that was the Trump administration. But the problem really has not gone away. 74 million actual breathing humans voted for him. That is terrifying.

Here in Finland, after articles in the press - and taken to the extreme by online echo chambers - claiming that young immigrant gangs of hundreds that roam the streets of Helsinki have caused a spike in violence (not true: no such gangs, no spike in violence the police tells us.) and that the immigrants spread coronavirus (half-truth: immigrant population indeed has higher rates of COVID-19 - but after adjusting for geography, age and income, the difference diminishes), and that immigrants get more social security benefits (half-truth: same as before, largely due to demographics), the True Finns Party - Finland's version of the MAGA crowd - has taken the top position in polls.

I can't help but think that the timing of these somewhat dubious articles (and outright misleading click-bait headlines) has something to do with the municipal elections coming up - even though immigration really isn't a municipal issue.

A lot of the yellow press has ties to the right side of the aisle, and touting of immigration issues usually tends to eat away the support for the left. But this time, some of these came from the usually more neutral sources, Helsingin Sanomat and the National Broadcasting Company YLE. And it also looks like the Finns' gains have been largely from the more moderate right, National Coalition Party. Hmmm...

Anyway, right now, even though the war is still on, a big battle has been won, albeit too barely. It's time to celebrate a little. Or a lot. Oh, and each time Trump loses again in courts, extra cheers. It looks like a loser-party that never ends, 30-odd times and counting ;-)