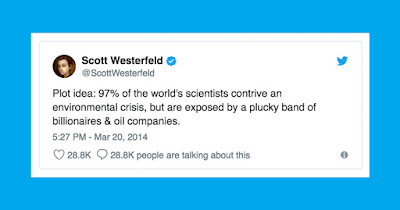 TRUMP is brilliant at buzz words that stick.  Think: FAKE NEWS.  He made it famous. But FN has been around forever. And the movies have made fun of it. In the movie Too Hot to Handle (1934 Clark Gable, Myrna Loy) Gable plays a news photographer. His editor sends him to China to get a fighter plane in action and other boom-boom footage. When there isn't any Gable tries to stage a bombing. He uses a model airplane and a kid who is supposed to be in the attack. The kid won't cooperate and the toy plane fizzles out. Wag the Dog (1999  Dustin Hoffman and Al Pacino) is a black comedy on the same subject.

But Trump is in a league of his own, with help from FOX NEWS (2,800,000  viewers – October 2018). FN is  T's propaganda machine. And some people say the network runs the White House.  A bunch of right-wing sites like BREITBART are also on board. They tout that that legitimate newspapers (i.e. the Washington Post, the New York Times)  are publishing Fake News. Mistakes happen, but fact-checkers and readers usually call them out.  On the net, it's a free-for-all.

Trump spouts fake info ad infinitum. His BASE couldn't care less. The Post has a staff of fact-checkers who check everything he says. In a little over two years, he's up to over 7,000 lies. Like a rock star. his fans eat it up. I just read in the Post that his lies are so transparent his lawyers use it as part of his defense (some of Trump's legal documents come with a disclaimer in case he's sued). At rallies, after he whips up the crowd, he points to the journalists and yells look at them, 'enemies of the people'. Like lions attacking Christians in the Roman Colosseum, trumpsters have attacked reporters. But hell, why be civilized when it's so much fun to punch someone.   Trump said he'll pay the legal fees. Bullshit.

Next week: DICTATORS got STYLE

Note to EKI re FACEBOOK: you said that posting on FB was like chatting over a coffee table. But when you blah-blah in person it disappears into the...... Posting on FB (unless you're a diligent editor)  stays there. I read in FT that today by the time most young people are18 they will have  had 70,000 photos taken of them. A lot of the pics are posted on FB. This group grew up on social media, but they're choosing sites that are more private (WhatsApp, Instagram).

Note: Not much to add to this. Well, perhaps the far-reaching damage of this "fake news culture" should be pointed out: the overall erosion of understanding expertise, the proliferation of Dunning-Kruger infested idiots who think they know better. This can be seen in the denial of science concerning climate change, evolution, vaccination etc. The players spewing disinformation are largely the same, Trump and the GOP included.