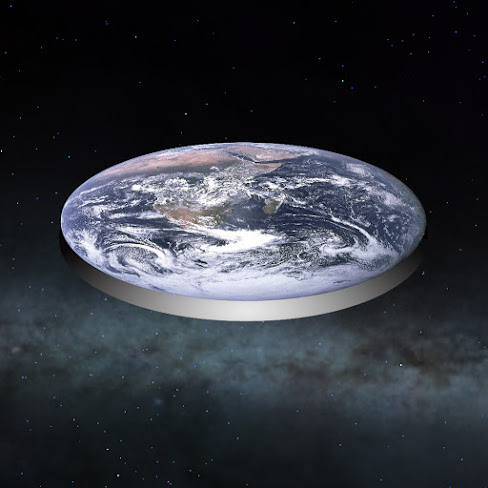 Blue Marble (The Earth as seen from Apollo 17), flattened.
2015:  Donal Trump rolled down  the escalator at Trump Tower to announce he was running for president  - like GOD descending to earth in a Sat. Night Live skit.  He paid a small crowd to cheer. His cartoony looks and rage-rant were comedic. The media zoomed in, so did we. Love him or hate him, he was not boring. By a fluke, he won. Oath Keepers ad Proud Boys were waiting for a leader like Trump... Ok, ex-military and retired cops, are trained, armed and organized. PBs, white males with a mission to take back America, designated a terrorist org. in Canada. The two groups ignited the mob that stormed the capitol. Five people were killed. By comparison, Qanon is a quirky-jerky cult that touts Democrats are pedophiles, with headquarters in the basement of a pizzeria in Wash. D.C. A Qcon member was arrested after  he shot up the joint.

Trump also has built a rock-solid, adoring  Base. Terrified of being primaried by a T chosen candidate, most Republican senators and reps have bowed down and kissed his ring. After four years of a crack-pot president, in exile now plotting revenge, there are red alerts. The Economist picked How Democracies DIE* as the most important book  of the Trump era. A noted historian** urged the US to read The Rise and Fall of the Third Reich.*** Corrupt politicians and conspiracies have been around since God. But Trump's Black-Magic is tapping Social Media on speed – that evil Genie can't be put back in the bottle.

PS: The Twitter ban has muted Trump, it's also victimized him.

PS2: A gold, six-foot statue of Trump dressed in shorts and clogs, is front and center at the Conservative Political Action Conference. Made in Mexico.

PS3:  Authorities warn that extreme right-wing groups have hatched a plan to bomb the Capitol when President Biden gives his first speech to a joint session of congress. The date has not been announced.

Next Week: FINNAIR Falls Flat On Its FACE

I'm kindasorta bored of the Trumpist insanity. There are more relevant conspiracy theories out there - anti-vaxxers come to mind (though sure, there's overlap). I hope the Oath Keepers, Proud Boys and the rest of MAGA conspiracists will soon flush down to their proper place in history: to the sewer of irrelevance along with the flat earthers, Area 51 nuts, evolution denialists, 911 was a hoax crowd, climate change denialists, chemtrail wackos and the already mentioned anti-vaxxers.
I don't think they deserve the attention anymore, really. Or, more accurately, hope.