*STRONGMEN: The BULLY CLUB that wants to rule the world

Vladimir Putin compared his invasion in Ukraine to rape, ”You Sleep my beauty, you're going to have to put up with it anyway.” Donald Trump, who captured the Republican party, did everything but pull down his pants and have a public hard-on to prove he was stud enough to grab-ass any woman or country. Xi Jin Ping, who plans to be China's president-for-life is bully-in-chief. 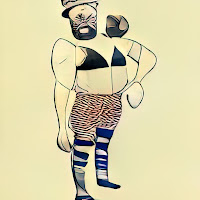 Putin and Trump, the tough guys in the playground,  strut their stuff, create chaos and leave a bloody trail in their wake. Members of the gang include Modi in India, Orban in Hungary, Bolsanaro in Brazil, and Johnson in Great  Britain. The UN reckons that 85% of the world's people live in countries where authoritarian populism exists and freedom of the press is squelched.

In the US, unless there's a miracle, Trump, or one of his minions will be on the Rep ticket in 2024. Dems have got to use shock ad awe to knock Reps off their keisters. For ex., run a split Dem/Rep ticket. Once Strongmen get in power the game is...

*The Age of STRONGMEN by Gideon Rachman

Next week:  Whatever happened to PLAYFULNESS?
Note: Well, I'm an eternal optimist. I cannot believe people would be stupid enough to elect Trump *twice*. I see the current turmoil as as the last attack of the dying beast, the one-more-scare at the end of a horror film, after which all will be fine. 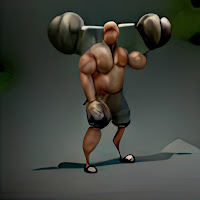 Gotta admit though, that people at large have proven me wrong time after time, the bar can't be buried deep enough to stop people from digging a route under it. Case in point: Bongbong Marcos and the Philippines.
PS: The illustrations in this post were all created by Artificial Intelligence, AI*. The only input was a string of text, similar to this: "An early 1900s painting of a strongman wearing striped tights, lifting weights in the circus".

I actually made a whole bunch of them, here's a gallery of selected ones - from funny to menacing to disturbing to weird and even beautiful.
https://photos.app.goo.gl/uqVUxMMxV6wMmhUR7
We live in interesting times!

*Most of these were done with Dall·E Mini, some used a Google Colab notebook with imagenet_16384.
CU
--
Eki
Posted by Eki Halkka at 05:09