A producer friend, Robin Dalton, (Oscar & Lucinda, Country Life), belongs to the Academy. For several weeks before the Oscars she goes to see the nominated feature films, short films, animated films, foreign films and documentaries. She said almost all of them had full houses except for the docs. And yet, big-time directors such as Martin Scorcese and Werner Herzog are making them, in addition to the thousands  of independent doc filmmakers. 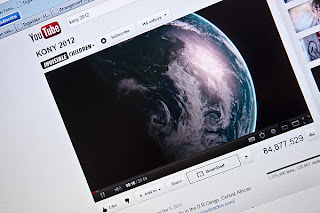 But now one has hit pay-dirt: KONY 2012 (30´). They stopped counting after appox 50,000,000 hits on youtube. About the children who have been abducted by the dictator Kony, it hits all the right buttons: a sad, horrific story about kids who have been abducted and have suffered in terrible ways. And it has a mission: to alert the world to Kony and try to track him down (the US government has about 100 troops on the ground trying to do the same thing),

Going viral with a doc on youtube is like buying a lottery ticket.  So what keeps people developing, shooting, editing and promoting their docs, often financed with their own money. In my case, it´s like a drug. Just can´t stop. When an idea (or title) pops up, I call Eki or unpack my camera and start shooting. And then there´s the fun of sitting for twelve hours at a time at SpaceWhale editing with Eki.

Next week: What´s Hot, What´s Not in the USA
Posted by little margie at 16:24