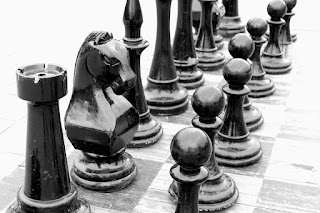 Image by Kejamy / Pixabay
Chess is hot. And why not. A game that's been played, more or less for 1500 years has legs.  Blame the latest surge on the the 'Quern's Gambit'  - a Must Watch during Social Isolation.  Or credit Magnus Carlsen, the hunky, young, Hollywood-handsome Norwegian, who is the highest-rated player since ratings began.
Google must have picked up that I was checking chess sites.  Magnus showed up. I could follow his moves and learn how to WIN.  Gave up after the second move – lost. Checked out Bobby Fischer, who got wiped out by comedian, Bob Hope, who played checkers with the pieces. Chess clubs are all over the place. Finland is into it. A perfect game for Finns – it takes strategy and there's not a lot of blah-blah. Oodi, Helsinki's central library, where you can do almost anything, has a club. Beginners welcomed.  The oldest chess club in the world – Part I (1800  - 1914) – has the longest name:  Schachgesllschaft.

I've learned the rules for beginners: for ex., how to set up the board, the best openings, to castle early -  preferably on the king's side, en passant, move knights before bishops,  control the center, the points for each piece, the queen is the most powerful, but the king is the most important. According to the Washington Post, chess is sexy.  Maybe that's why the majority of players are young. And you don't have to be a genius to be a good player  - it takes hard work. Mangus Carlsen said the first line in his memoir will be: "I am not genius".  Whew. Whatta relief.  CHECKMATE!

I've played chess a bit but was never very good at it. And to add insult to the injury, some of my friends are. So, while playing chess at a bar was all fun and games when we were hanging out when young, it was also a somewhat constant stream of losses for me - also financial ones due to the many, many beers I had to buy for the winners ;-)