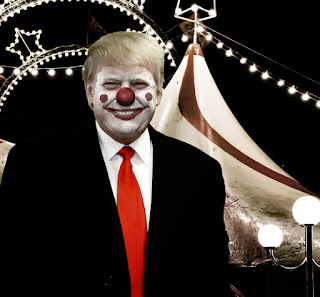 A composite of images from Pixabay
TRUMP got run out of Wash DC by 81,293,098 voters.  He's back up in his Florida digs plotting revenge. The law is on his tail. Criminal evidence piles up. Big-business cash, banks, Twitter and Facebook have dumped him. Old-Money, Palm Beach neighbors want to kick him out of Mar-a-Lago.  But his MAGA  gang is hanging in.

Showdown 2020 by Little Margie Productions
What a movie – horrible and hilarious. A second impeachment will try to nail him for stoking up up the rally crowd to storm the capital. And for two months he tried to annul the election. We wait for the scene when the sheriff opens his toxic tax returns. The reveal? Money laundering for the Russians? Over-evaluating properties to get loans?  Under-valuing them to taxes? Secret payoffs to women he sexually harassed? A shocking surprise? All of the above, or worse?

Trump has 70 million in campaign-cash to make trouble. We've gotta hope that the cray chaos of the last four years is a wake-up call for US. We thought he was a joke.  Ha. Ha. TRUMP turned out to be THE JOKER.

“What fools these mortals be” --  Shakespeare

Next week:  FINLAND for FOREIGNERS: an outsider's view - ODDBALL  EVENTS
Note: On this blog, Maggy writes, and I find and/or make the images (and fix the typos, ha!). This week, we discussed a cartoon with Trump writing "AIR FORSE 1 TOO" (sic.) to the side of his private jet with a sharpie. It was a funny idea, but A) i do not think it would have worked too well in practice B) it would have been quite a lot of work to make well and C) I like to surprise Maggy with my choices of imagery. So Trump the joker it is ;-)